Commission to Study the Administration of Guardianships in Nevada's Courts 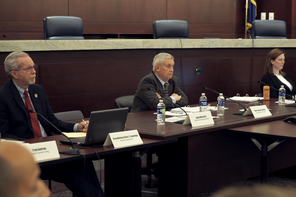 My Statement to the Commission

​​​​​After the media storm of 2015 highlighting widespread abuses in guardianship, I was summoned to appear before the Commission to Study the Administration of Guardianships in Nevada's Courts on August 17, 2015. Audio of my initial statement to the Commission can be found here:

My most recent trip took me to Washington, D.C. where I witnessed misrepresentations made to Congress that Las Vegas' criminal fiasco (amounting to a legal mob preying on the elderly, disabled, their estates and families) had been addressed with sufficient, successful reform measures such that Nevada appear a "Model of Reform" for other jurisdictions with similar issues. Nothing could be further from the truth!

All of my solitary work (including travel expenses) has been voluntary. The wealth of knowledge, documentation, and contacts I have accumulated are enormous.

I am now at a point where I need assistance.  The first thing I would like to do is establish formal mechanisms devoted to helping those that have lived or are currently living this nightmare and to prevent others from becoming ensnared by a criminal enterprise that will not let go until nearly every penny of victims' estates has been consumed in illegal fees.

My efforts to develop those formal mechanisms will be updated shortly.